There’s something due, any day;
I will know right away,
Soon as it shows…
We convened on the Thursday evening in Cork in preparation for the Sunday afternoon concert. This 2 hours warm up and informal rehearsal wasn’t obligatory; the real work began tomorrow, as if…..everyone who could be there was there. All were tired, but all entered the zone.

We didn’t spend the evening on the relatively obscure Three Russian Songs, or the Russian language Polovtsian Dances, but on the familiar West Side Story. Why? Timing. Think Jazz, not classical, leave the cathedral and enter New York streets. Who is a visual and who is an aural learner? What am I? Visual, yes, visual; of course I’m visual. I know I’m not a great sight-reader till I get the chord palette for the piece. Yet, even answering the question, I felt then and later that my answer had changed. It came up again in differing ways after prompts by Brian, comments on dynamics we were yet to bring into the music and even in the performance hall. 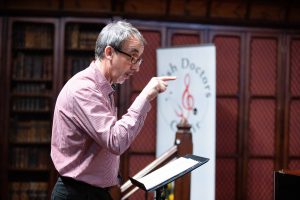 Thursday evening, Friday and Saturday, working our way through details of three wonderful, contrasting pieces, their notes, rhythms, timings, lyrics, dynamics, We continued working with Brian even on Sunday morning up to the rehearsal, using some of the pieces as warm up. Each hour brought something more to the technicality of the repertoire, but the musicality gradually came to the fore in the expression of those specific technicalities with Brian’s expressive encouragement and guidance.
Then, the thrill of the performance.  The audience was a good size, the Mayor of Cork and a local consultant intensivist both spoke on behalf of the city and the charity, the room was both atmospheric and beautiful. 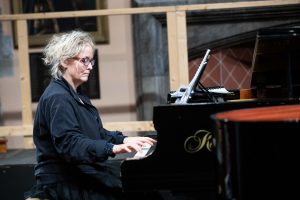 We started with Rachmaninov Three Russian Songs, rhythmic and dark in tone and content. A Byelorussian colleague told a member afterwards that she understood our songs, relief considering the effort taken to learn the texts. The rhythms of the songs were accompanied by dual grand pianos played by Frances Kelleher and Gareth Lewis. They made the instruments swirl and flourish around the songs with furious speed and complexity, bringing a stunning colour to the performances. After this, the final lines of the third song came along as a quiet, rapid sequence as intended, to finish with gentle piano ending, a silence then a single, intriguing grace note on a dark minim. The effect was quiet drama. 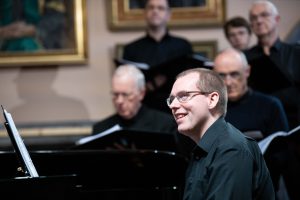 We were straight in to Borodin Polovtsian Dances from Prince Igor, with its gorgeous and spectacular double piano accompaniment so expertly played by the two pianists. The piece has the sweetest of soprano sequences, translated ‘Fly on the wings of the wind to our native land, dear song of ours..’ The melody and accompaniment manifested in music the light joy of the text. Complex piano sets moved us to the famous acclamation for the Khan, which soared through the hall with great power, and the opening theme recurred with altos in a gorgeous flowering of texture. The acclamations culminated in an expansive climax to finish the first half. We moved into the alumni room behind the stage to let the charity address the audience. The chatter and excitement in the room was exhilarating in itself.
Then we had West Side Story Choral Suite. When rehearsing, Brian asked us himself of ‘Make of Our Hearts’, ‘Is this kitsch or classic?’ How do you answer? We differed, we agreed; we agreed that it could be either or both, it was all in the presentation and context. The opening ‘Something’s Coming’ was exiting as it began creating an anticipation and then swelled at the right places for Hollywood choir-style effect. Its finale was bright and full of hope and joy. Bring that down with the poignant and beautifully tender ‘Maria’ sung by 6 tenor ‘Tony’s’, move into the quirky and fun San Juan and America which rises from comedy to glorious female voice chordal texture and follow with sustained, joyful finale. This wasn’t just a crowd-pleaser, it was a choir-pleaser, it was technically challenging and a joy to perform, so much so Brian led his first encore with a reprisal of the opening chorus, sung with even more excitement and anticipation than the first, from both audience and choir. Many of us hugged him, Frances and Gareth on the way off stage and after, we were so carried away with the joy of the shared experience. 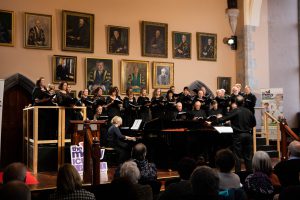 You know, we get so much from this choir. We get superb choral coaching, the networking is fascinating, students get offered encouragement  and even mentorship. However, we get even more than that. In the lead up to Workshops and rehearsal weekends, the WhatsApp for registrants comes alive with excitement, but what really says it all is the torrent of appreciation and goodwill among the choir members afterwards, especially to and from new members who are new to the community and the experience. It is hard to put this into words, other than to say simply what several people said to me and others this weekend, that they have joined a family, the Irish Doctors Choir Family.
Immeasurable.

We are rehearsing online every week. Members can find out more about our programme...
Scroll to top