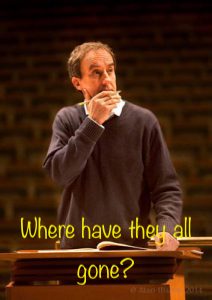 This year has been a disrupted and disturbing one so far for Irish Doctors Choir. The epidemic and China was just spreading when we held our first workshop in Dublin on 29 February.  We really had no idea of the impact across the world, our working lives, our families or our physical and mental health. We did know that coming together physically as a choir could be under threat.  This weeks we held our first online rehearsal. How did we get to this point? Maybe we can use what Brian taught us about how Beethoven arrived at his ninth symphony.

The ninth symphony is the first choral symphony from any composer.  The rules had been worked out in the classical period, what was a sonata form, a symphony form. He broke the rules. Brian took us through a tale of three Kyrie’s to show developments in complexity and more. It was a story of a brilliant musician and composer straining against convention and rules confining his instincts.  He painted a picture of technical brilliance.   You can only be shocked if expecting something and it doesn’t arrive; Beethoven brought us sequences lulling the ear into a sense of security of what chord was next expected, but bringing the unexpected briefly, with a reassuring return, following the rules again. He used pivot chords to modulate from one key to the other, the subtle use of a common chord between two keys to flip from one to the next. It was new, technically brilliantly playful and has been used since then famously by The Beatles. He created drama by returning to the starting key, like C Major, bringing back the expected as a surprise to powerful effect.  There was a more intense way to understand this, of a brilliant mind raging against the rules, whose madness and deafness brought something like an innocent chaos from his mind to the page. He was the ‘Enfant Terrible’ between classical and programatic romaticism and there is the paradox leading to the debate of where he should be placed in musical history. He was the pivot chord, he was both. He was the shock of the unexpected himself.

Brian took us into on the Choral Fantasia and then the Choral Symphony finale, using the development of the same melody, which the composer had reworked many times until he cracked this most famous on in the symphony. We went through the Choral Symphony finale section by section. Moving to off copy made us all nervous with a few ‘la la’s’ in place of words….but released lifted the vocal quality of the singers and the pace accelerated and the structure of the work started to sink in.

And then Covid-19 came to Europe, social distancing and cessation of movement.  We cancelled our Handel concert with the newly informed Irish Doctors Orchestra to celebrate 200 years of the Rotunda Hospital in Dublin. We cancelled our March workshop. We worried. We took part in our duties as members of society and healthcare professionals. We did our duty. And then…we went online. IDC Committee meetings are usually online, so why not even if this was new ground for all concerned?  After two quick pilot sessions, Brian, Olivia and Gareth worked out the rules of engagement. Two night ago, thirty-nine Irish Doctors Choir singers took part in an online rehearsal. We followed Brian’s well-tested approach using physical and vocal warm-ups and moved from Frère Jecques / Bruder Jakob to and Hungarian melody and then to cover some of the Handel Foundling Anthem that was intended for the Rotunda performance. Brian broke new ground and reprised a phenomenon that we experienced in An Grianan last year, when a recording engineer helped us hear what we were achieving. The effect was dramatic at that time, reinforcing tangibly the improvements Brian was trying to hone in on. His idea was for us to record our individual tracks and send them in, without adjustment.  Listening back after the pilots showed really clearly what I had to change to improve quality and Brian picked that up. Our online rehearsals will be brilliant exercise in vocal coaching as we learn more music.  Maybe we can get a charity track from this. Maybe we can keep up our community. I listened as each singer introduced themselves and watched their faces as we sang. I wondered what each person was going through, hidden behind the image, what they feared and had experienced in their daily life during this awful pandemic. We could see each other’s effort and smiles. I was glad. I’ll be there next week.

Brian, Olivia and Gareth have broken the rules and broken new ground for us. It can seem mad when you do that, but we must seize this chance to grow and change and move from the confinement of the rules to something new.

Confidence and the Journey…..adapting to online IDC
Scroll to top